The topic of the project was Deep Reinforcement Learning – preparation of the topic “artificial intelligence” and implementation of an agent in the game “Sonic the Hedgehog”. Sonic is a computer game series of the Japanese publisher Sega. The classic main parts of the series are characterized by fast 2D jump ‘n’ run passages. There you control the blue game character Sonic The Hedgehog through so-called “zones”, 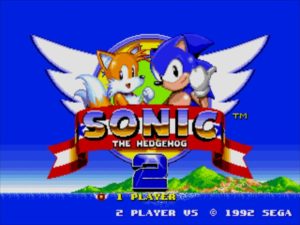 which are divided into individual “acts”. In all Sonic games, rings are collected, which the main character loses when touching an opponent. If he is hit without rings, you lose an extra life. In the classic main games, after using up all extra lives and continues, you have to start all over again after a game over.

The task of the student group was to implement an agent into the game and finally to give a project presentation about the project. To accomplish this overall goal, some intermediate goals had to be achieved:

1) Acquire an understanding of artificial intelligence and neural networks

How is the project structured?

Trainees of the vocational school “information technology assistants” (German: “Informationstechnische*r Assistent*in”) took part in the AI project. The AI project took place in the second year of training within the framework of the learning field “Planning, implementing and evaluating projects” (practice). The total time required was 160 hours per school year. The project meetings usually took place on a full day of lessons. The students had the opportunity to work in the computer room or in the corresponding workshops of the school. During this time, a teacher was present to provide support but did not actively participate in the project.

Team speaker: Moderates the group work and makes sure that everyone can get involved, that the topic is worked on consistently, and that the team rules are observed.

Timekeeper: Makes sure that the timetable is respected.

Foreign Minister: Communicates with people outside the team, maintains contact, and involves people.

What do the trainees learn in the project?

The trainees were able to acquire both technical and social skills in the course of this project. On the one hand, they learned project-oriented work in a group, they set themselves goals and divided and organised their work independently. On the other hand, they independently dealt with a programming language (Python) that was new to them and learned its basics to the extent that they were able to understand, modify, and create programs. In addition, the trainees have dealt with the basics of neural networks and the different terms of machine learning, so that they were able to present the basics to their fellow students and explain the terms. They acquired this knowledge mainly by watching videos. They used textbooks less because they mostly dealt with the AI topic in a very mathematical way and the mathematical knowledge of the students was not sufficient for this.

They have dealt with the topic “Deep Reinforcement Learning” and were able to program an agent to such an extent or to change existing programs in such a way that this “agent” learns to improve “his” game. In the end, they got so far into the programming of the “agent” that they were able to explain to their classmates which parameters they had to adjust/change so that their “agent” could improve his game.

Reflection and Recommendations for other teachers

The supervising teacher reports in the interview that basic knowledge in the field of AI is becoming increasingly important for information technology assistants since, in the context of the digitalised working world, processes are increasingly influenced by algorithms and the use of computers. In addition, many of the students attend the technical secondary school (In Germany: Fachoberschule für Technik) after their vocational schooling in order to subsequently complete a corresponding course of study. Since the students have to deal with the topic of artificial intelligence at the latest then, it makes sense to deal with it already in the vocational school. In the project documentation, the students report that it was surprisingly easy to acquire basic knowledge about AI. However, they emphasize that the deeper immersion in the subject matter was an obstacle, as more complex mathematical knowledge would have been necessary. The students report that reading about this AI content sometimes led to lower motivation and productivity. Overall, however, the students report that the choice of project was a good decision and that they have gained an advanced understanding of AI and its practical implementation.

When asked about what needs to happen on the part of the school and the teachers so that such projects can be practiced regularly, the teacher interviewed reported that, on the one hand, appropriate further training for the teachers is necessary. Besides the transfer of knowledge about AI, the joint development of teaching concepts should be more important. In addition, existing teaching materials should be jointly reviewed and classified. Useful material could then be made available to interested colleagues as Open Educational Resources. The exchange with product developers is considered desirable in the area of teacher training. In such a framework, the social, political, and sociological aspects of AI should be discussed more critically.

The teacher recommends that the students have a say in choosing the appropriate topic. Students need motivation and perseverance to work in project groups, so it is an advantage if the project tasks are linked to the students’ interests. In addition, clear evaluation criteria should be established and communicated transparently.

You want to know more about the project? Maybe even implement it yourself? Then take a look at the detailed report: CaseStudy_AI_Gaming_Project_eng